Let's face it. These little guys are cute and far too many are purchased without planning. Not only that, but some sellers trying to make a quick sale greatly underplay how difficult they are to care for. 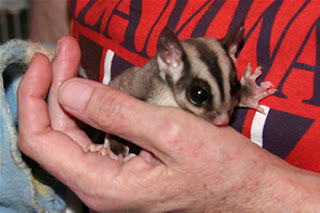 Though having a sugar glider as a pet can be very rewarding, it isn't as simple as caring for a hampster. They live for 15 years, bond with their owners, are highly intelligent and require a special diet.
Without the right socialization, habitat and feeding, behavior and health problems are common.
Because of this, sugar gliders have become "disposable pets."

We want to make sure every glider owner is successful and that the gliders in their care are healthy and happy. 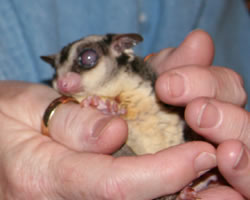 A pair of breeders, George and Gracie were in terrible condition when Angie received them.

George came so severely malnourished that he had HLP (hind leg paralysis) and was blind. The first night they were here, Gracie led George to the pouch. Though not in as bad a shape physically, Gracie was very suspicious of humans and did not know how to play.

After weeks of subcutaneous fluids, calcium injections and nutritious diet, George gained weight, gained some motor control and is able to follow light/shadow. Angie designed a special pouch to make it easier for him to get in and out of.

After three months, George gained some motor control and would launch himself toward Angie's voice and Gracie had even begun playing.

George still has a long road ahead, but day-by-day, George and Gracie are learning to trust.


How can you help?

Spread the Word. Education can make the difference between successful glider ownership and gliders who will never have a forever home.

Adopt. Please consider adoption whenever you can. There are many gliders and colonies of gliders needing a loving forever home. Know that adopted gliders need special attention and deserve love and care even if they are mistrusting of humans and are not tame enough to be held.

Discourage impulse buying. Pass the word, don't buy an animal at a flea market or pet store . Do your homework and get referrals to a great breeder--one who checks out buyers and gives healthy and true information about what it really takes to care for a glider. If they make it sound easy...run.

Speak up. Report animal abuse to your local police department, ASPC, and the USDA—the agency who licenses breeders. Put your complaint in writing in addition to calling so the record will be included in the offender's file for reference. If you don't see action, don't give up! If someone is not able to help you, ask to speak to their supervisor.

Refer people to this site. We believe education is the difference between owners whose gliders end up in rescue after a few months and those who become successful glider parents. This site is a resource for glider owners and potential glider owners. There are other great sites in our resources section.