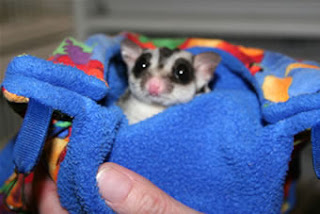 Have you ever talked about your gliders like they are human? Sometimes we find ourselves doing just that, but in reality we know that our gliders are animals. We love them that much.  After doing sugar glider rescue for many years we would like to share just a little about what we know about how the glider mind works.
Sugar gliders are amazing animals, but they are animals. Even domesticated animals will bite if they get frightened or stressed. Often we hear people say that their gliders hate them or they are evil. Gliders don’t have human emotions or the ability to be evil.

Gliders only know fear and trust. We have seen gliders that are attacking their owners but will take a treat from us and then scamper down our shirts for a nap. What we believe is happening is that the gliders, like other animals can smell fear. When you are scared of being bitten you are sending out that signal to the gliders. Have you ever heard the phrase you get what you expect? It’s kind of like that with gliders. 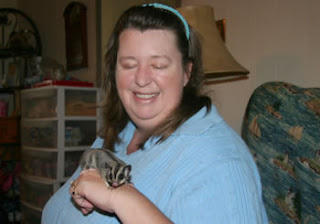 Gliders each have different personalities. Some gliders do handle stress better than others. This could be for many different reasons. I have seen gliders so stressed they will attack their bonded cage mates in an effort to flee the danger they feel. I have witnessed seizures in a glider that became extremely stressed when handled by humans.  If you have ever heard of someone having a panic attack, it appears that’s something like what these gliders experience.
Recently a study has been done on Elephants that have been severely traumatized. Researches believe that these Elephants have a disorder similar to Post Traumatic Stress Disorder. Some of these Elephants will relive the traumatic event even years later if they smell a certain odor or hear a noise related to the trauma.  You can read about PTS in Elephants here: http://www.elephants.com/ptsd/ptsd.htm
What we do know is that animals can experience fear and trust. They can try to get away from stress or they can attack when they feel threatened—the fight or flight response. We know that the earlier an animal is socialized to humans the better, but we've seen many older animals respond to patience and consistent handling over time.  Un-socialized animals can become aggressive. Gliders that go from home to home can lose trust in humans and have issues with stress which is why it is important for people to understand that gliders require "forever homes." 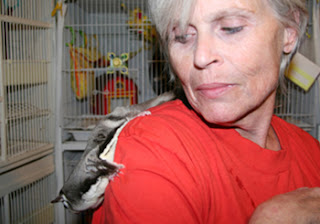 So how to you deal with an overly stressed, aggressive glider? I have heard some people say you just let them bite you over and over and eventually they will stop. I would not encourage that at all. You may get bitten, but one or two bites is much different than hours, days or weeks of getting chewed on plus can you imagine the stress that glider is feeling.
If you have a male, have the vet neuter as soon as possible. I often hear people saying they don’t want to neuter for various reasons. Some of the reasons are that they don’t think its natural; they want their sex drive so their gliders should have a sex drive too, or that they wouldn’t want to be neutered so they won’t do that to their pets. Once again we are putting human emotions onto gliders. The fact is neutering is safe when done by an experienced vet, reduces the chance of future health issues, decreases aggressive behavior and also helps control the population of gliders needing future rescue. Animals don’t choose to have sex or reproduce; they do so because it’s what animals do.
Don’t force yourself on the glider but do things on its terms and comfort level. Some of the things that I have found that work include keeping the glider in your room where you sleep. When you sleep the glider sees you less of a threat, after all, a big bad predator is not going to sleep in front of its prey.  Make sure that your glider is not a lone glider. It’s very important that we let these colony animals be with their own kind. The difference seen when a lone glider gets a friend is amazing. We have seen lone gliders of up to 8 years go right to another glider all the time chirping and grooming the other.  Offer treats frequently, meal worms work wonderfully as they are a gliders favorite. Speak softly and never yell, grab or abuse the glider. Most gliders will respond to positive reinforcement. Give the gliders space to be gliders! Out of cage time even for all gliders, even aggressive gliders, is much needed. I would encourage everyone to speak to their vet about their gliders if they are stressed. There are some medications that can be given for compulsive behaviors that work wonders.